Just when you think you’ve seen about everything 2020 has to offer, there’s always something else about to surprise you.

This was proved yet again on EastEnders on Tuesday night, as bosses came up with a seriously inventive way of filming a wedding while also keeping to social distancing rules.

During the episode, characters Rainie Cross and Stuart Highway tied the knot with one of them stuck in a car, with the pair even sharing their first kiss as a married couple through the window. 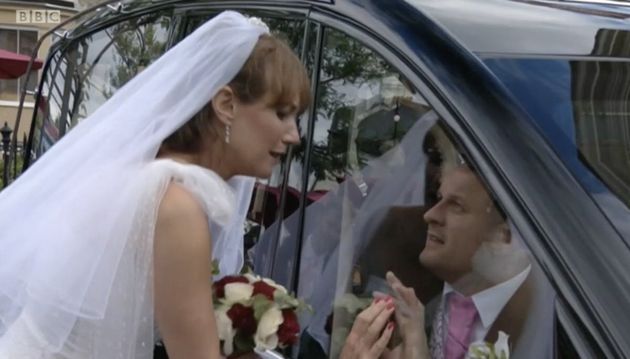 The hapless couple’s wedding day went off course when the electrics failed on the vehicle Stuart was driving, locking him inside.

We should also point out, said vehicle was actually a hearse they were using from their funeral directors business to cut costs, but we digress.

As panic ensued, their friends and family were unable to free Stuart, and with the risk of their wedding day being cancelled altogether, Ben Mitchell brought the celebrant to the scene to officiate the wedding there and then.

Rainie and Stuart then exchanged their vows through the glass as their neighbours watched on – from a safe distance, of course – before sharing a very 2020 kiss through the pane.

On Twitter, fans praised the creativity of the producers for coming up with a way around social distancing that also fitted the storyline and the characters…

I think this is a very clever way for stuart and rainie to get married whilst keeping their distance. #EastEnders

I really enjoyed the Stuart & Rainie wedding part of last episode, it was a creative and yet believable way to film a wedding with social distancing, well done!! #bbceastenders

A “normal” wedding wouldn’t have worked for Rainie & Stuart anyway. Too boring for them😂😂

That was certainly a creative way to do a Socially distanced wedding.

EastEnders bosses have come up with various tricks to get around most social distancing on screen, including the use of different camera angles, perspex screens that are edited out in postproduction, and even using actor’s real-life partners as body doubles in kissing scenes.

The soap returned to screens at the start of September after three months off air, after it ran out of episodes filmed prior to lockdown in June.