More than 140 schools across England have been forced to send pupils home due to positive cases of Covid-19, HuffPost UK has found.

Despite most schools only just coming to an end of their second week of classes, a review of some of the UK’s leading local and regional newspapers found that that dozens of schools had sent “bubbles” of children home following a positive test result from a pupil.

One of the main provisions in the government’s school reopening guidance is that pupils must be organised into “bubbles”, which avoid overcrowding and help staff maintain social distancing throughout the day.

They are also designed to manage outbreaks, with the entire bubble self-isolating if a pupil tests positive. While bubbles were encouraged in the guidance, no rules were set out by government on how they should be formed – which means the groupings range from the size of just one class to hundreds of pupils across an entire year group.

It means that while dozens of positive tests have been reported among school pupils and staff members, the number of children forced to stay at home and self-isolate is now hundreds of times that figure.

According to the Manchester Evening News, thousands of children across the city alone have already been sent home to self-isolate, with 55 schools confirming positive cases of the virus as of Thursday evening.

Meanwhile, an interactive map updated by Birmingham Live shows 29 schools which have reported positive cases of Covid-19, with groups of pupils from each school also sent home to self-isolate as per the government’s advice.

Leeds Live reported on Tuesday that 10 schools had reported positive cases, among both staff and pupils, meaning “bubbles” of pupils across different year groups also had to be sent home. 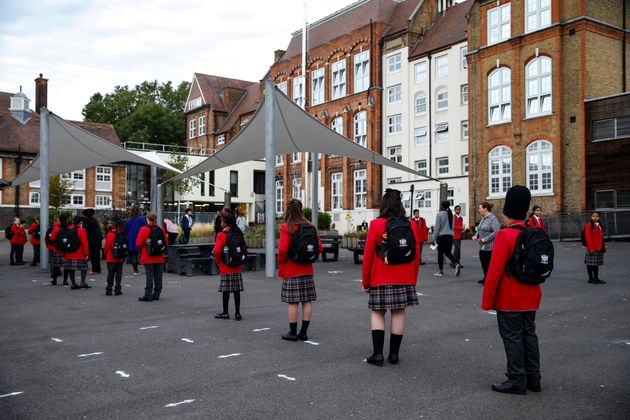 According to the Nottingham Post, eight schools had sent home students across the county as of Friday morning, while in Bristol four schools have reported positive test results, Bristol Live said.

Meanwhile in the capital, MyLondon reported that six schools had been forced to partially close after positive cases were reported within the school community.

HuffPost UK reported on Monday that thousands of pupils across the country had been sent home just days after their school terms restarted.

They included an entire year group at a primary school in Sittingbourne, Kent, and 160 pupils at St Augustine’s Catholic College in Trowbridge, Wiltshire.

At least five other English schools – in Suffolk, Staffordshire, Norfolk, Wolverhampton and Leicestershire – were also closed.

Dr Patrick Roach, NASUWT general secretary, said: “Teachers and other staff who are working hard to provide a safe learning environment for pupils will understandably be concerned about the confirmed cases of Covid-19 in schools that we are seeing.

“It is essential that everything that needs to be done is done to ensure the safety of staff and pupils and to protect the health of the local community.

“It is important that decisions on whether to close or restrict access to schools are guided first and foremost by appropriate public health advice.

“Schools will need to review their measures and controls to minimise the risk of virus transmission and ensure that all safety measures that need to be in place are in place and are being followed by children and adults.”