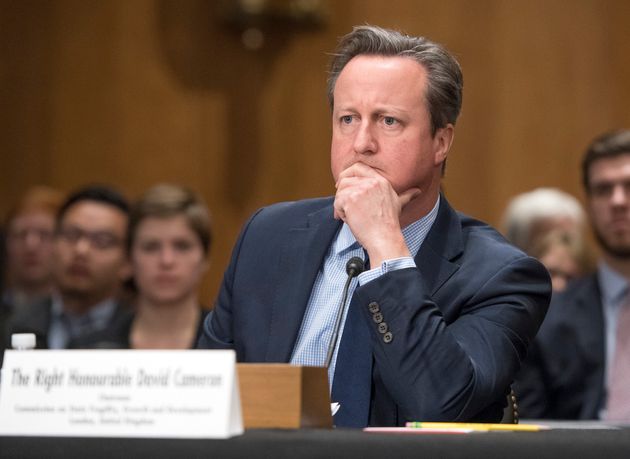 David Cameron, who presided over an austerity agenda while prime minister, has been criticised after describing how rewarding it was to help in a food bank during lockdown.

The former Conservative politician delivered food parcels to vulnerable families in April and was photographed near his Oxfordshire home loading supplies into a car.

He said he was helping St Mary’s Church and the Chippy Larder in Chipping Norton – the two charitable entities collaborated to provide for vulnerable people during the virus outbreak.

During an interview with Times Radio on Thursday, the former Witney MP said: “I worked for the Chipping Norton Food Bank actually one or two days a week, which was great to do something to help people who were really isolated and stuck at home.”

This sparked widespread criticism with many describing Cameron’s move as “weird”, “cheeky” and being “like a serial killer on the police force looking for clues”.

Feeding Britain is a charity geared at eliminating hunger across the country.

Andrew Forsery, the organisation’s national director, told HuffPost UK: “We would invite David Cameron to share with us his observations on why people have recently sought help from his local food bank, and what he thinks needs to be done to prevent this level and severity of need arising in future.”

Elsewhere, condemnation of Cameron has been swift.

Deputy leader of the Labour Party, Angela Rayner, tweeted: “David Cameron talks about visiting a food bank like it’s a nice day out. In one of the richest countries in the world people are reliant on food banks because of the political choices he made. As the architect of austerity I can’t believe he had the brass neck to show his face.

David Cameron talks about visiting a food bank like it’s a nice day out.
In one of the richest countries in the world people are reliant on food banks because of the political choices he made.

As the architect of austerity I can’t believe he had the brass neck to show his face. pic.twitter.com/jM489kS8tL

British satirical website, The Poke, suggested that the ex-PM volunteered in order to “keep a close eye on his legacy”.

David Cameron has been working at a food bank in Chipping Norton. He wants to keep a close eye on his legacy. pic.twitter.com/JwMI9giE1J

Another online user wrote: “However many shifts David Cameron puts in at his local food bank now, nothing changes the statistic that the number of food bank visits jumped from 40,000 to 560,000 during his time as prime minister, largely thanks to the benefit sanctions his government introduced”.

Someone else posted: “If David Cameron DID work at a food bank in Chipping Norton it’s a bit like a criminal coming face to face with his victims.”

However, a few people spoke out in Cameron’s defence.

The Times Radio presenter who conducted the interview with him, shared a few thoughts.

He wrote: “First, whatever the economy rationale for bringing down the deficit, austerity had a devastating effect on many people’s lives. The accusation that Tories appeared oblivious/indifferent to this is an understandable one.

“So, if you think that the ‘architect of austerity’ was blind to the impact of his policies it is surely a good thing, not a bad thing that he found out in a good bank. Albeit belatedly.”

And if your reaction to the idea of a food bank in the countryside is “ooh was it helping people running low on caviar and horse feed?” you need to take a long hard look at the almost totally-ignored issue of rural poverty. You’ll find you’re as out of touch as you think he is.

Another online user added: “Unfortunately Food bank’s go back a lot further than David Cameron. It’s great for anyone to volunteer. You’ll experience surprise, heart break, shock and euphoria plus many more emotions. It will change your life just as much as the individuals it sets out to serve”

The UK’s largest national food bank charity, the Trussell Trust, documented a 5,146% increase in emergency food parcels distributed between 2008 and 2018.

In that decade the food bank network went from distributing just under 26,000 parcels a year to handing out more than 1.33 million of them.

Cameron has also claimed that austerity meant that the UK was in a better position to deal with the Covid-19 pandemic.

In an updated version of the paperback edition of his memoirs released on Thursday, he argues that cuts introduced when he came to power in 2010 did “fix the roof when the sun was shining”.

He added: “Covid-19 was the rainy day we had been saving for. Our actions meant that the next but one administration was able to offer an unprecedented package of measures to prop up the economy.

“I sat watching Chancellor Rishi Sunak’s press conferences thinking how vital it was that we had taken those difficult decisions when we did.”

The ex-PM popularised austerity and always championed these series of budget cuts. In his keynote speech to the Conservative Party forum in Cheltenham in April 2009 he declared that “the age of irresponsibility is giving way to the age of austerity” and committed to put an end to what he regarded as excessive government spending.

However, experts argue that a decade of austerity left the country weakened and brought the NHS to its knees ahead of the Covid-19 pandemic hitting the UK.

Responding to Cameron’s assertions, leading think-tank IPRR tweeted: “Austerity ripped the resilience out of the health and care service – just look at the unsafe bed levels as the virus hit”.

Coronavirus Curfews: These Areas Could Be Next To Face New Rules