Tests for coronavirus will be rationed after a surge in demand amid a spike in infection numbers left the system struggling to cope.

Health secretary Matt Hancock said patients with acute medical needs and people in care homes will be at the front of the queue for Covid-19 checks under a new system.

Hancock confirmed the government would publish a new prioritisation list while answering an urgent question in the Commons.

The minister, who acknowledged a spike in cases as the R-rate of the virus rose above one last week, was told repeatedly the government’s testing service was failing to meet demand, with people forced to travel long distances.

HuffPost UK reported last week that testing centres have been turning away thousands of people, including key workers.

Hancock admitted there were “operational challenges” and that prioritisation was “a choice that we must make”.

“We have seen a sharp rise in people coming forward for a test, including those who are not eligible,” he said.

Acute clinical care is the top priority, with social care next on the list and receiving more than 100,000 tests a day. 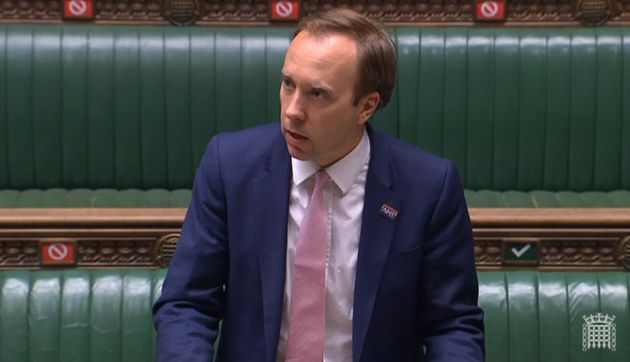 “Throughout this pandemic, we have prioritised testing according to need. Over the summer, when demand was low, we were able to meet all requirements for testing, whether priorities or not.

“But as demand has risen, so we are having to prioritise once again and I do not shirk from decisions about prioritisation. They are not always comfortable, but they are important.”

There have been widespread complaints that tests are unavailable, people are waiting more than 24 hours for results or are being forced to travel large distances to get a test.

But Hancock insisted tests were available, telling MPs that the average distance travelled to a test site is now 5.8 miles, down from 6.4 miles last week.

He told the Commons: “As we expand capacity further, we’re working around the clock to make sure everyone who needs a test can get a test.”

But he acknowledged the virus was spreading, both in the UK and around the world.

“There are signs that the number of cases in care homes and the number of hospitalisations is starting to rise again,” he said, explaining why the “rule of six” restrictions were imposed on Monday.

Testing is a shambles. People who are unwell or with poorly children need tests now.

Infections are rising & ministers are losing control of the virus.

Downing Street denied reports that tests are not available in the worst-hit parts of England.

A No 10 spokesman said: “We would say that it is wrong to say that testing is not available in these areas.

“Our capacity continues to be targeted to where it is most needed, which is why booking slots and home testing kits are made available daily for people with symptoms.”

The testing situation was discussed at the Cabinet meeting on Tuesday morning.

Experts had called for tests to be rationed and complained that capacity had not expanded to meet the expected rise in demand as schools reopened and people returned to workplaces – as the government has urged in England.

Sir John Bell, regius professor of medicine at Oxford University, who has been advising ministers, said the speed at which more people would need tests had been underestimated and warned that the problem could get worse.

“A month ago, they had spare capacity in testing – significant spare capacity – but I think what has been underestimated was the speed at which the second wave would arrive, but also the pressure put on the system from children returning to school, and the testing demands associated with that, and people increasingly out and about.

“So I think they are definitely behind the curve in terms of getting the necessary tests for what we need today.”

NHS Providers chief executive Chris Hopson said the health service in England had been hit by staff being off work who were unable to get a test.

He said the NHS “simply can’t spare members of staff waiting for tests not being able to come into work” and patients unable to be tested.

Professor Alan McNally, director of the Institute of Microbiology and Infection at the University of Birmingham, who helped set up the Milton Keynes Lighthouse Lab, told BBC Breakfast there were “clearly underlying issues which nobody wants to tell us about”, plus a surge in demand for tests.

10-Year-Old Won Drum Battle Against Dave Grohl, So He Wrote Her A Superhero Theme Song