Protestors at a rally opposing restrictions aimed at curbing the spread of coronavirus and against the idea of a vaccine clashed with police and were ordered to disperse or face arrest.

The anti-vaccination and anti-lockdown demonstration took place at London’s Trafalgar Square on Saturday afternoon despite the government ban on all social gatherings of more than six people in a bid to tackle the rising Covid-19 cases.

Metropolitan Police reported that those attending the event were “putting themselves and others at risk” and that some had been “hostile” and “violent” towards police officers who attempted to: “explain, engage and encourage them to leave.”

“This, coupled with pockets of hostility and outbreaks of violence towards officers, means we will now be taking enforcement action to disperse those who remain in the area.Those who remain may get arrested.

“It is important to remember that we are still in the middle of a global pandemic, and the changes have been introduced to help control the spread of the virus, keep everybody safe and save lives.

“We encourage those in attendance to leave the area immediately.” 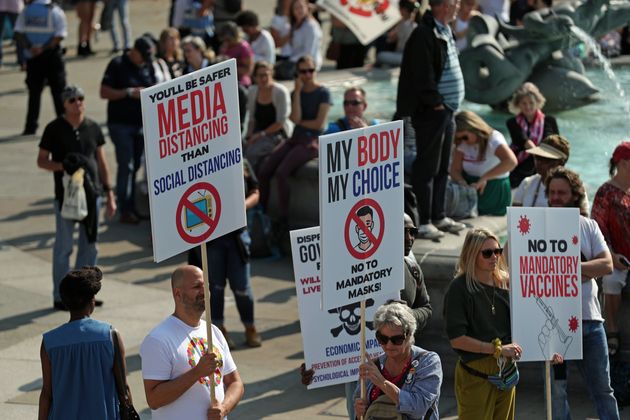 Police are encouraging protesters in #TrafalgarSquare this afternoon to leave immediately. Officers will take enforcement action to disperse those who remain in the area. https://t.co/qGWE65Ai7m

“I know that vaccines make people sick, you should not trust the government, the doctors and the media;they are lying about the Covid-19 vaccine.

“Vaccines have not been safety-tested, they tell you when you take a vaccine you’ll get a little bit of swelling, is that true? No.

“You can get multiple sclerosis and allergies, when I talk to parents, there are 12 known diseases you can get.

“If you’re a parent, auntie, grandparent, cousin or neighbour, we’re here to say the truth will come out.”

Scuffles broke out between demonstrators and police. Metropolitan Police officers moved in on the protesters as they congregated near Nelson’s column.

The protesters formed human blockades opposite the officers to stop them from making arrests. 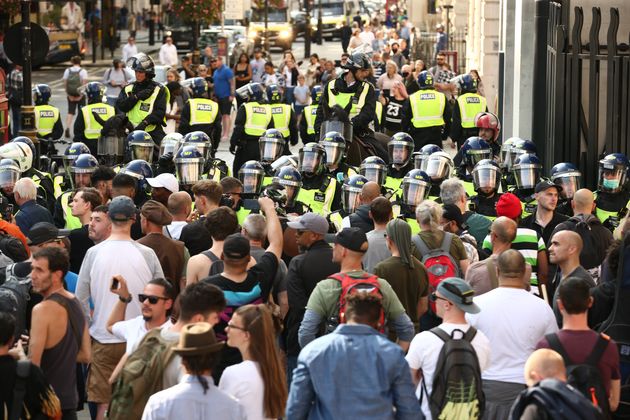 Organisers sold t-shirts bearing 5G conspiracy theories and advocating the legalisation of cannabis as a range of speeches were made to the crowd.

One protester held a banner calling for the government’s Sage scientific advisers to be sacked, while another’s declared Covid-19 to be a “hoax”.

Addressing the crowd to huge cheers, organiser Kate Shemirani said: “We are the resistance.”

Dozens of Metropolitan Police officers, including some on horseback, later attempted to break up the gathering in Trafalgar Square.

Traffic was brought to a halt as protesters erected a blockade in a bid to prevent officers from making arrests. 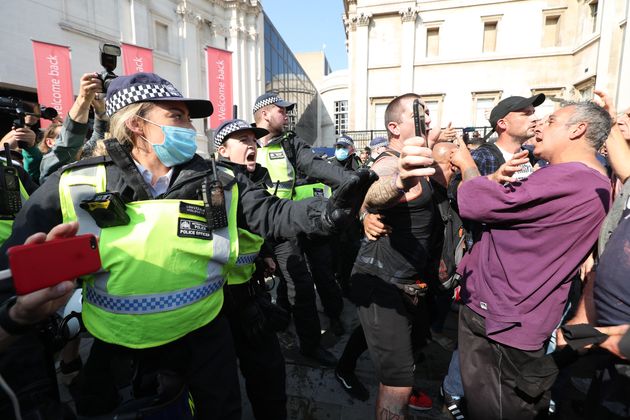 One protester hit a London taxi after the driver beeped in frustration. The protester then appeared to spit through the window at the driver.

Another protester’s large dog escaped from its lead and ran around near the National Gallery.

Police then moved in for a third time to try to shut down the rally protesters. Shortly after 4pm on Saturday, officers wearing riot gear closed in on the campaigners from both sides of The National Gallery.

The protesters then formed a huge blockade of hundreds of people, before some began throwing bottles at the officers. Others sat down to block their path.

One protester could be seen with a bloodied head which occurred during the scuffle.