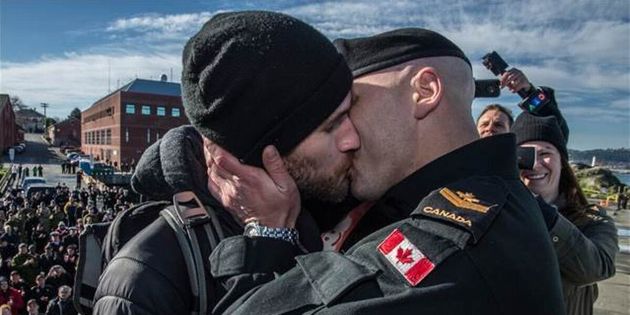 A hashtag used by the far-right hate group, Proud Boys, has been hijacked by the LGBT+ community.

The white supremacist group gained notoriety earlier this week when US President Donald Trump refused to publicly condemn them during the first presidential debate with Joe Biden.

Responding to a question from moderator Chris Wallace, who asked if he would condemn white supremacist and militia groups that have showed up at some protests, Trump said: “Sure, I’m willing to do that. But I would say almost everything I see is from the left wing, not from the right wing.”

On the Proud Boys’ account on the messaging app Telegram, members of the group celebrated the apparent endorsement.

“Trump basically said to go fuck them up,” said one of the Proud Boys’ leaders in a chat on the right-wing social media app Parler. “This makes me so happy.”

In response, gay men have taken to Twitter to reclaim the #ProudBoys hashtag, flooding it with photos of happy – and proud – gay couples.

Among those who have posted in support of the hashtag include the Canadian armed forces, who tweeted a photo of one of their members kissing another man.

“Love is love. Know what we mean?”

The tweet has been retweeted more than 7,000 times within hours of being posted.

The hijacking of the #ProudBoys hashtag has been partly attributed to actor and activist George Takei, who wrote: “What if gay guys took pictures of themselves making out with each other or doing very gay things, then tagged themselves with #ProudBoys.”

I wonder if the BTS and TikTok kids can help LGBTs with this. What if gay guys took pictures of themselves making out with each other or doing very gay things, then tagged themselves with #ProudBoys. I bet it would mess them up real bad. #ReclaimingMyShine

The LGBT+ community responded immediately with rainbow flags and messages and images of queer love and pride.

The #ProudBoys heading to the frontlines. pic.twitter.com/4dmiAsKcq5

YALL. The #ProudBoys hashtag has been hijacked by the gays to piss off the Nazis and I’ll happily do my part by flooding the internet with the only acceptable proud boys out there: the very gay ones 🌈 pic.twitter.com/cnlmyfhGyH

Trump’s Doctors Say He Could Be Discharged From Hospital Tomorrow