Ban On Household Visits In Scotland Under New Coronavirus Rules

Ban On Household Visits In Scotland Under New Coronavirus Rules 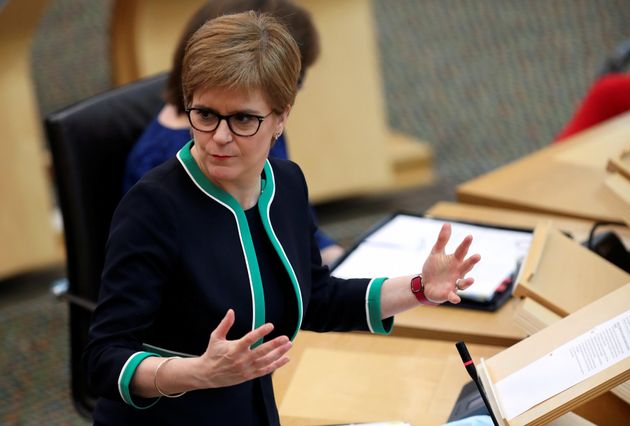 Household visits will be banned across Scotland from Wednesday, Nicola Sturgeon has announced.

The decision by the first minister means there will be much stricter new rules in Scotland than imposed in England by Boris Johnson.

“I know how miserable this is for you and you have been so patient,” Sturgeon said.

“We are trying to give you as much flexibility as we can. In return, please work with us and do your best to stick to the rules, for everyone’s sake.”

As in England, a 10pm curfew will be put in place for pubs, bars and restaurants in an effort to suppress the recent surge in coronavirus cases.

Sturgeon said that the Scottish government was seeking to strike a balance between reducing the spread of the virus and safeguarding jobs in the industry.

Workers in Scotland, as in England, have been asked to continue to work from home if they can.

Sturgeon told employers who have encouraged people back into the office to “rethink that”.

She added that if there is non-compliance from employers, then the Scottish government may impose a “legal duty” on businesses to allow home working.

Addressing reports that measures in Scotland could be in place for up to six months, the first minister said she hoped that would not be the case.

She told MSPs: “It is certainly the case, until scientific developments such as a vaccine change the game in the battle against Covid-19, it will have an impact on our lives.

“That doesn’t necessarily mean that all of the new restrictions I am announcing today will be in place for six months.

“By acting early and substantially, our hope is that these new measures will be in place for a shorter period than would be the case if we waited longer to act.”

The new measures put in place for Scotland will be reviewed every three weeks, the Sturgeon said.

The move come after the UK government’s chief scientific and medical advisers warned there could be 50,000 UK cases a day by mid-October with a daily death toll of 200 or more by mid-November if the current growth in the rate of infection is not halted.

If Boris Johnson Wants The Public’s Backing On New Restrictions, He Must First Apologise