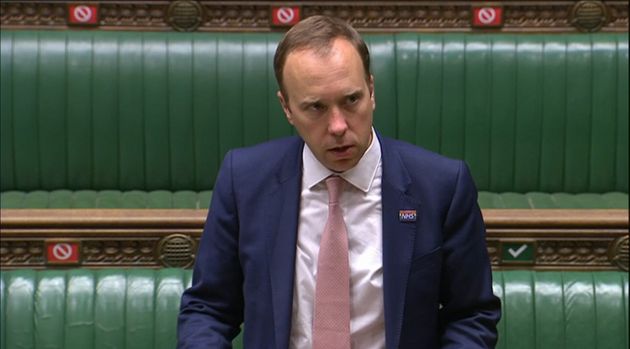 Armed as ever with statistics, Matt Hancock started the Commons debate on coronavirus by telling MPs just what a diligent parliamentarian he was. The health secretary had answered seven Urgent Questions, made 12 oral statements and taken 800 interventions from backbenchers. At which point one notable backbencher, Sir Desmond Swayne, heckled: “More!”

True to form, it was Swayne who later proceeded to live up to his reputation as the most provocative of Tory grandees, declaring that chief medical officer Chris Whitty and chief scientist Patrick Vallance should have been “sacked” for their stark warning that we could see 200 deaths a day by November if the government failed to intervene with new restrictions.

“I am left wondering if the Prime Minister has not been abducted by Dr Strangelove and reprogrammed by the SAGE over to the dark side,” Swayne said. It was yet more “Project Fear”, the veteran Brexiteer declared, even suggesting that Whitty and Vallance simply wanted “to make your flesh creep”.

It’s worth pointing out here that it was another scary forecast (also not a prediction) that acted like an electric jolt to the British government back in March. Neil Ferguson’s 20-page paper summarising work by his Imperial College team warned of half a million deaths if no action was taken. Hancock himself used the paper to persuade the PM and fellow ministers that drastic measures were needed. The UK still ended up having one of the worst death rates in the world, but it could have been much worse.

But what was most notable today was the sheer number of Tory backbenchers who were unhappy with their government, many of them realising that the ‘Rule Of Six’ has indeed become the ‘Rule of Six Months’, with many families set to be barred from seeing relatives at Christmas.

Swayne ominously referred to Cromwell being the last leader to try to curtail Christmas. Mid Derbyshire MP Pauline Latham urged students to “defy what the government says: go home and see your family”. Latham even said many old people would “rather see their family than live a longer life”.

In some ways, Johnson has already tried to reassure the rebels by holding meetings with lockdown sceptic academics like Carl Heneghan and Sunetra Gupta. While the ‘alternative Sage’ is seen as being peopled by risk-minimisers, the real alternative Sage is made up of Heneghan and Gupta and others who think fresh curbs would be disproportionate.

Although Whitty and Vallance wouldn’t object to as wide a debate as possible, there are dangers however if the PM opts to ignore their advice and allows the personal attacks on them to go unchallenged. Only last week, Johnson failed to slap down DUP MP Sammy Wilson when he claimed their “exaggerated” models were “scare tactics”.

One simple question for Keir Starmer this week in PMQs would be whether Johnson still had confidence in Whitty and Vallance. Back in the Brexit wars, Michael Gove famously said Britons had had “enough of experts”, but several ministers fear that undermining the two chief expert advisers carries risks to the clarity of public health messaging.

On a purely tactical level, the government may avoid the threatened rebellion this Wednesday over the Covid regulations renewals. The expectation in Westminster is that Speaker Hoyle will follow clerks’ likely advice and not select the Graham Brady amendment on procedural grounds. I’m told that’s because its demand for more frequent parliamentary renewals would inject “legal uncertainty” to a straight Yes/No vote on extending current powers.

The fact is that it would take new legislation to amend the 1984 Public Health Act, which governed this whole lockdown. A smarter move would be to offer a debate on a motion similar to Brady’s, while issuing a ministerial statement that no urgency procedure would be used except where absolutely necessary. Given that Steve Baker and other rebels held a “cordial” meeting with the chief whip and Jacob Rees-Mogg today, that may be what happens.

But Hancock isn’t abandoning his own tough line on the virus. Today, he said: “We either control the virus or we let it rip… no matter how well we protect the vulnerable, letting the crisis rip would leave a death toll too big to bear.” Many Tory MPs think those aren’t the only two options (Baker objected that no MP had called for the virus to be let rip), but Hancock was pretty firm. Figures showing more people on ventilators and in hospital (a measure No.10 treats even more seriously than case numbers) added to his case.

At the end of his statement, the health secretary then unveiled a new north east lockdown that underlined his determination not to be put off course by the lockdown sceptics: for the first time in the pandemic it will be illegal (not just advisable) to meet people other than your household in a pub, bar, restaurant or your own home. Add in all the new hefty penalties for not isolating, and it looks like, for all the noises made to calm down Tory MPs, that Hancock still has the PM’s ear.