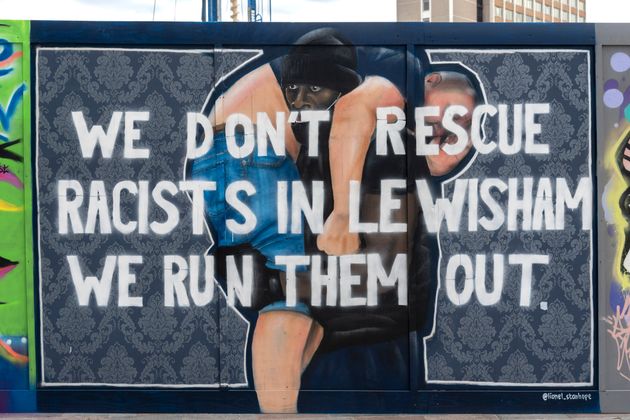 An anti-racist mural depicting the moment a Black Lives Matter supporter rescued a far-right protester has been removed just days after it appeared in south London.

The artwork in Lewisham becomes the latest with an anti-racism message to be targeted after similar incidents in Manchester, Dundee and Glasgow.

It featured the image of Patrick Hutchinson carrying ex-British Transport Police officer Bryn Male over his shoulder, with the message: “We don’t rescue racists in Lewisham, we run them out” written over the top.

It was a nod to the 1977 Battle of Lewisham where hundreds of violent National Front activists were literally run out of town by anti-racism campaigners.

However, on Monday a white man not from the borough was seen covering it with blue paint.

In a video posted to his Twitter account, anti-racism campaigner and former Met officer Adam Pugh – who added the wording to the original mural – approaches the man and says: “Didn’t like what was there before, no?”

The man, who calls himself “Butch”, replies: “Wasn’t me. Anything that goes up on here if it gets bombed or tagged out then it needs to be cleaned.”

When pressed on why he was painting over the mural, he stated he was doing it “off his own back”.

The mural, painted on the hoardings surrounding the £375 million Lewisham Gateway development, was created by local artist Lionel Stanhope on Monday last week after he sought permission from developer Balfour Beatty to transform the site into a public gallery with the help of ten other local artists.

The wording, however, was added on Saturday by Pugh after a conversation with Stanhope regarding a backlash over the original painting. 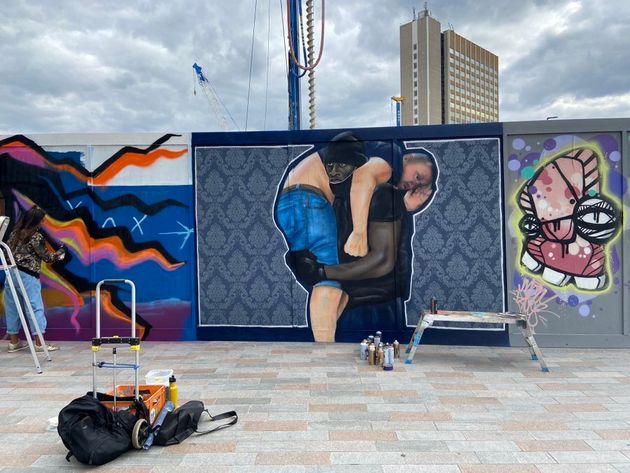 Critics say the frequent mainstream use of the image shows an obsession with Black respectability – an implication that victims of racism should meet bigotry with kindness even when faced with the threat of violence.

Speaking to HuffPost UK, Pugh, who is white and a life-long Lewisham resident, revealed why he added the wording.

“It was a tribute to the Battle of Lewisham but it was also a case of saying that this is not a safe space for people to be racist, we’re not going to meet you with kindness, that’s not going to be welcome here,” he said. “It’s not promoting violence at all.”

He added: “Balfour Beatty is building these luxury apartments that no one in the local community can afford. Gentrification is violent and – to me – is racism; it is displacing the local community which is predominantly Black. To me it was ironic that this particular image went up in that particular location. It symbolises a lot – plus it was a white guy who did it.

“This is not an attack on the artist – he was trying to create a space for local artists to paint and also get paid. It’s just he missed the mark with this particular piece.”

It’s the “So what does that mean then?” for me.

Someone fetch Miles a Kleenex, two paracetamol and a local history book pronto. Bless him. 🤣💀 pic.twitter.com/1IrkOZ1cXK

However, there was then some backlash to Pugh’s choice of words.

One upset man filmed a video in front of the mural and said the wording is encouraging a race war.

He said: “It’s [the artwork] a tender moment of redemption for people who are ignorant. They can have their redemption. But, for some reason unbeknownst to me, they decided to deface it with this [the message].”

Pugh told HuffPost UK: ″Everybody that’s local to the Lewisham area, especially Black people, have been very supportive. When you go online and see the comments, it’s such a Black and white divide [in terms of ethnicity of those for and against for wording on the mural].

“When I first tweeted the photo of the original mural, it left a bitter taste in my mouth because of the way the image is being used. It’s the new symbol of gentrification in Lewisham; it popped up in Peckham Rye last month and I’m seeing the way that white people are latching onto that image as a means of promoting respectable Blackness.”

Sallie Foyeh, 28, is one of the many Lewisham residents who appreciated the wording on the mural.

She told HuffPost UK: “We should all be decent human beings to each other but if someone’s going to hate us because of the colour of our skin, why can’t we run them out? It’s not violent. I don’t think we should tolerate racism.

”Why does the burden always have to fall on the Black person to be the kind and compassion ones when facing racism? It’s exhausting. The whole rhetoric behind the protest [when Hutchinson was photographed] was Black Lives Matter being demonised while far-right protesters were getting away with what they’re doing.” 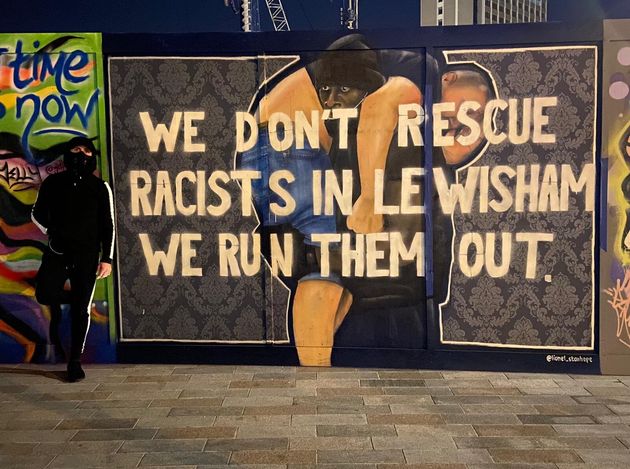 “A lot of people have been having conversations about street art starting important conversations, what the picture meant and why some Black people were offended,” she added. “That man painting over it completely, with a random geometric shape, silenced that discussion.”

For Pugh, allyship is important and should be underpinned by actions as opposed to empty words.

“Allyship has to come from an action. It can’t just be words or sitting on Twitter,” he said.

“So many people were outraged about the original mural, didn’t like it and were offended. I live five minutes away, it’s nothing for me to go and do it – and it’s a simple way to actually cheer people up and restore some balance in the community.

“Now the majority of people in Lewisham are happy about it. It’s new, white, middle-class residents who have come into the community and feel a sense of entitlement who are upset about it.”

Now that the mural is no more, local residents are lobbying for painting of Kevin Clarke, a Black man who was killed in 2018 by police in Lewisham, to be drawn in his memory opposite Lewisham police station.

While debate around his photograph’s symbolism ensues, Hutchinson’s intentions were honourable and he has rightly been lauded for that.

Speaking in numerous press interviews, the father-of-four has always maintained his philosophy behind his actions on 13 June: “It’s not Black versus white, it’s everyone versus the racists.”