An advert suggesting a ballet dancer retrain and work in cyber security has sparked widespread outrage, with critics saying it shows “a total lack of respect for the arts” during the coronavirus pandemic.

The ad, which appears to be part of the government-backed ‘Rethink. Reskill. Reboot’ initiative, shows a ballet dancer tying her shoes, next to the text: “Fatima’s next job could be in cyber (she just doesn’t know it yet).”

The ‘Rethink. Reskill. Reboot’ initiative is part of CyberFirst, a government-backed programme led by the National Cyber Security Centre. The ad is one in several of the same style posted on the QA website. QA offers cyber skills training, working with the CyberFirst programme. The other ads show people working in industries ranging from hospitality to fashion and textiles.

Author Nick Pettigrew suggested the advert appears to be from a 2019 campaign. However, the ballet dancer advert started to gain criticism online this week, after it was shared by theatre casting director Anne Vosser on Sunday.

It sparked thousands of further comments and retweets when shared by journalist Hannah Jane Parkinson on Monday.

HuffPost UK has contacted QA, as well as the relevant government departments, to find out more about the adverts.

This ad is a disgrace! The total lack of respect for the arts by this dreadful government has to stop!! Talk about also crushing young performers dreams! Rethink Reskill Reboot??!! How dare they! @OliverDowden@RishiSunak@BorisJohnson#WeAreViable#SaveTheArtspic.twitter.com/nyZy44l0JA

The ad has been circulating on Twitter at a time when the arts are struggling to survive due to the coronavirus pandemic.

It follows controversial comments made by Rishi Sunak made in relation to the arts last week, when he said: “I can’t pretend that everyone can do exactly the same job that they were doing at the beginning of this crisis.

“And that’s why we’ve put a lot of our extra resource into trying to create new opportunities for people”.

Many people shared their anger about the advert on Twitter, including Rosena Allin-Khan, Labour MP and shadow cabinet minister for Mental Health.

Fatima, you be you.

Don’t let anyone else tell you that you aren’t good enough because you don’t conform to their preconceived social norms. pic.twitter.com/92E286LNR9

I don’t think an advert has EVER made me this angry or upset. How can they justify telling people who have trained for years in their dream career that they should just “rethink reskill reboot” because they aren’t going to do anything to help them? pic.twitter.com/JxChCD3Q2O

The UK government has become the Dad in Billy Elliott pic.twitter.com/XLAxtvd5FX

it is quite stunning to see the government tell the entire music, art, culture and entertainment industry to get in the bin. so thoughtless and destructive.

This is horrible. Get the sentiment but devalues the importance of arts, also devalued the transferability of these skills. Whether she stays as a dancer or not, it’s important and eternal work

I spent 16 years training tirelessly to become a violinist. Practiced every day for hours from aged 4. Dedicated my life to it. Began my degree in it. But had to stop due to injury. I miss it every day.

“Rethink, Reskill, Reboot” is perfect advice, but for the government, not Fatima. pic.twitter.com/fIY8Sf1FuV

“I agree it was crass,” he wrote. “This was a partner campaign encouraging people from all walks of life to think about a career in cyber security. I want to save jobs in the arts which is why we are investing £1.57bn.” 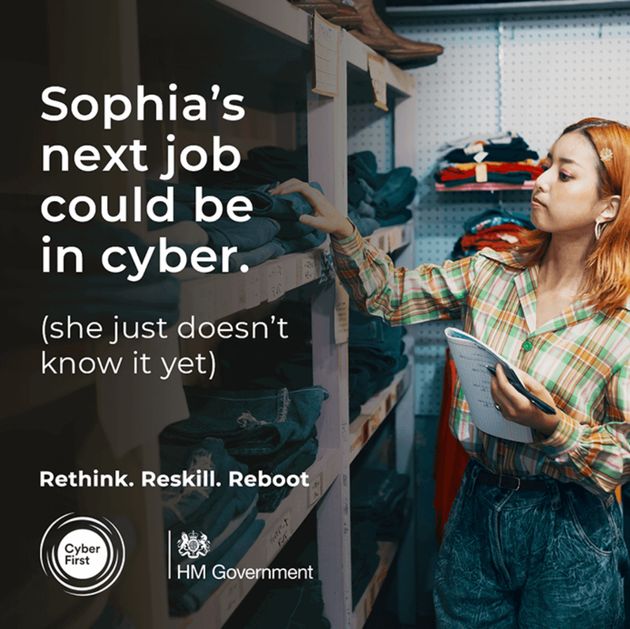 The National Cyber Security Centre – which leads the CyberFirst programme – also told HuffPost UK “this is not a NCSC campaign”.

It has been suggested that the CyberFirst campaign is from the Government Communications Headquarters (GCHQ).

HuffPost UK has contacted the company QA, where the advert appeared, as well as the Department of Work and Pensions and the GCHQ to try to get some answers. We’ll update this article when we receive a response.