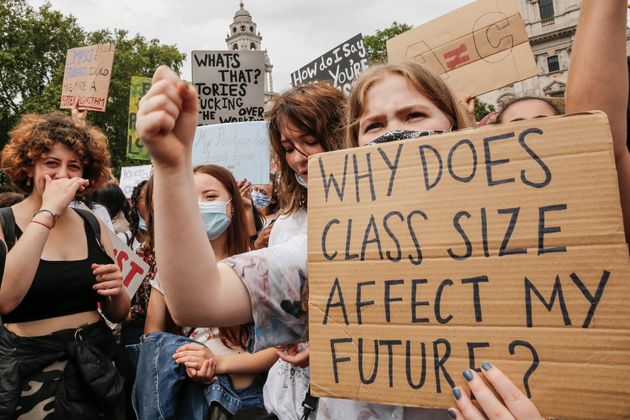 Just days ago, students across the country eagerly tore into their GCSE and A-Level results envelopes, but 280,000 of them were shocked to find their marks being downgraded due to an algorithm designed to predict their exam performance.

It was a disaster, so much so the government has now announced a U-turn on the entire process.

Yet the algorithm isn’t just a “one-off” mistake put in place during cancelled exams and a pandemic.

It reflects the reality of education in Britain today – a two-tiered schooling system that benefits the rich, while neglecting poor children of the education they deserve.

And now the cracks in our education system have been exposed, it’s high time to abolish private schools entirely.

There was never going to be an easy way to assign grades once exams were cancelled, but the designed algorithm penalised bigger classroom sizes and used previous school performance to ensure national results were “broadly similar to previous years.”

Private school students had the advantage because independent institutions do very well in terms of exam results and have fewer students, but bright students in underperforming schools had results downgraded through no fault of their own, only their post-code.

Think that’s not fair? Now imagine an entire system built to perpetuate exclusivity and give rich people an advantage that increases the wealth gap by restricting social mobility to lower classes.

That’s the reality of private schools in Britain today.

Only six per cent of schoolchildren are privately educated in our country, but they make up 25 per cent of the student body in UK’s top universities.

If we lived in a true meritocracy, private schools would already be a thing of the past.

Universities could be doing everything to widen access and participation but the real problem starts in the schooling system.

As state schools experience extensive cuts, private schools are able to earn and save money. Plus their charitable status means they don’t have to pay tax, having to support outreach programmes to qualify for this status.

State-run and private education is worlds apart and it makes absolutely no sense that in 2020, our country has an outdated education system benefiting only those who can afford it.

I know how unfair private schools are, because I went to one for seven years after moving to the UK in 2005. My parents put me into an all girls, independent in a leafy London suburb because my mum’s work offered her an education budget as part of her expat package.

Looking back, it’s crazy to think that on top of regular classes, we had elocution lessons and regular afternoon teas with the headmistress to improve our table manners.

Why else would this happen if not to give children an unfair advantage and teach them how to navigate highly exclusive, elitist spaces?

We need to realise that private school abolition isn’t a radical left-wing dream.

It wasn’t a bad school at all, in fact, it was really good for supporting students with learning difficulties who wouldn’t have had the same resources in a financially deprived state school, but surely we need a well-funded system equipped to teach everyone, not just those who can afford it?

I can’t even begin to imagine how different my life would have turned out if I wasn’t afforded the privilege to collect all the “cultural capital”, private school contacts and a horrendously posh accent that only seems to come out when I meet other people who went to private school – it’s like a secret code that makes people think you’re “one of them.”

Besides, you have to be so rich to pay the school fees, most of the people studying and teaching there are out of touch with reality.

I know some children who never got public transport because they were exclusively chauffeured around town in their Land Rovers.

Plus, mocking the nearby state school students, who were mostly working class, was a regular pastime for many and teachers never seemed to intervene.

I cringe to think how much the word “chav” and other derogatory terms were thrown around in the locker room without any real consequences. Now think of how many people at the top of society, including those governing this country, have attended similarly institutionally elitist institutions that support a hierarchical system.

One of the biggest arguments for not abolishing private schools is the fear it would worsen the standard of education because it would bring everyone down to a lower level.

It’s the idea that some good quality education is better than none. But how do we know that when we haven’t even tried? Nationalisation wouldn’t be cheap or easy, but in the long-term, it would mean redistributing resources which are controlled by those who have the means to afford them.

What we need is a fair taxation system charging parents the amount they’d be paying towards their children’s education anyway but would also benefit the children of those who can’t afford to.

The only reason you wouldn’t want a fair system is if you actively know you’re giving your children a head start in an unfair society.

Think of all the children who want to fulfil their dreams of being lawyers, writers, doctors, actors, politicians or artists but are stuck in an environment that places hurdle after hurdle and traps them in a cycle of poverty.

If we lived in a true meritocracy, private schools would already be a thing of the past.

We need to realise that private school abolition isn’t a radical left-wing dream but fundamental to a fairer, better functioning society. And now is the time to start talking about what that looks like.