5 Fibs Donald Trump And Republicans Told You This Week

5 Fibs Donald Trump And Republicans Told You This Week

This week HuffPost UK’s ‘5 Fibs’ is a Republican National Convention special, due partly to the fact it was a pretty important event but mostly because the scale of deception on show was simply monumental.

To get an idea of the lengths Donald Trump’s party are going to in an effort to paint the president as the saviour of America, consider this tweet posted by a Republican senator on Thursday…

This is what a Biden Presidency will bring to your city.

Hats off to CNN for having the stamina to continue to carry water for democrats.

That’s right, Republicans are trying to sell ongoing dystopian scenes of carnage that are happening right now on Trump’s watch as what could happen under Joe Biden.

Melania Trump’s speech alone could make up this entire article. It was so far from reality the only logical explanation is the First Lady is kept in a room in the White House with nothing but a TV showing Tucker Carlson clips on repeat.

Such was the vastness of deceit on show that we can cover pretty much cover every major topic going.

The economy is a big deal for Trump, mostly due to the fact his reelection could strongly depend on it doing well.

As you will no doubt be aware, pretty much every country on the planet is currently struggling economically due to the ongoing coronavirus pandemic and the US in no exception.

Rather than acknowledge the downturn, vice president Mike Pence stood up on Wednesday evening and used one of the oldest Trump administration tricks – blame Obama.

He said: “Four years ago we inherited … an economy struggling to break out of the slowest recovery since the Great Depression.

“In our first three years we built the greatest economy in the world.”

In reality, the Obama administration started started the longest expansion in US history and remained in power while it oversaw most of it.

This was then handed to Trump who – until the biggest drop in US history last month – saw similar levels of growth.

There was much talk of the US military, how under Trump it is “great” but under previous presidents was not so great.

When asked during radio interview on September 11, 2002, Trump was asked if he would support an invasion of Iraq. He responded: “Yeah, I guess so.”

The next year, just days after the US launched its invasion, Trump said it “looks like a tremendous success from a military standpoint”.

It wasn’t until September 2003 that Trump first publicly raised doubts about the invasion, saying: “A lot of people (are) questioning the whole concept of going in in the first place”. 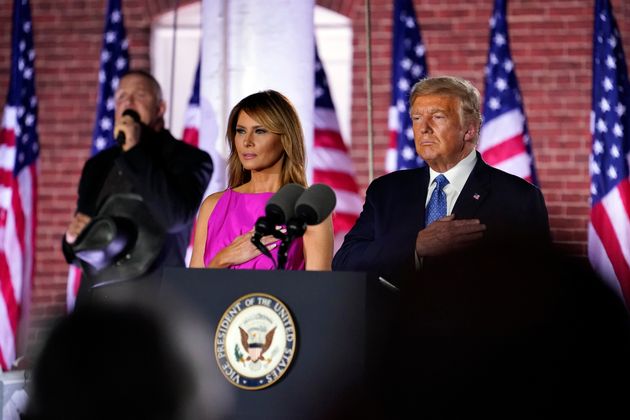 The first lady said: “He’s the first president to address a special session of the United Nations General Assembly to call upon countries across the world to end religious persecution and honour the right of every person to worship as they choose.”

Unsurprisingly this is utter tosh – the UNGA was founded in 1945 and religious freedom has been a hot topic on the global stage ever since, so the idea a US president had never thought to mention it is incomprehensible.

And surprise surprise, we only have to go back to *checks notes* the previous president for an example. In September 2012, president Obama said: “We not only respect the freedom of religion, we have laws that protect individuals from being harmed because of how they look or what they believe.”

Last up is Jack Brewer, a former NFL player who said something so demonstrably false it makes you wonder if he fell asleep in 2017 and was only nudged awake seconds before he spoke.

It is not a lie – it is one of the most documented quotes of Trump’s presidency, as his comments sparked outrage around the world.

Speaking about violence that broke out after neo-Nazi protesters – many chanting “blood and soil” and “Jews shall not replace us” – Trump refused to condemn actual self-professed Nazis.

He did acknowledge there were “some very bad people”, but added: “But you also had people that were very fine people on both sides.”

The lie detector determined that was a lie. pic.twitter.com/M8tALr4xCx

Just like his wife’s, the president’s speech could have taken up this entire piece, containing more than 20 false or misleading claims, according to CNN.

But we’re going to highlight just one.

Trump said: “The United States has among the lowest case fatality rates of any major country anywhere in the world.”

According to data gathered by the John Hopkins University, this is simply false, and the US case-fatality ratio is higher than Iraq, India and Russia, among others.

The US’ coronavirus death toll – the highest total death toll in the world – has been surpassing 1,000 people a day for weeks now.

Here’s a sum to put that in perspective:

According to the latest figures, 1,143 Americans died of the virus yesterday, and Trump’s speech lasted 78 minutes.

Given those figures, it would mean as the president of the United States publicly boasted about his response to the pandemic, around the country some 62 Americans died from Covid-19.

Inside The Lucrative Trump Meme Factories Run By Teenagers