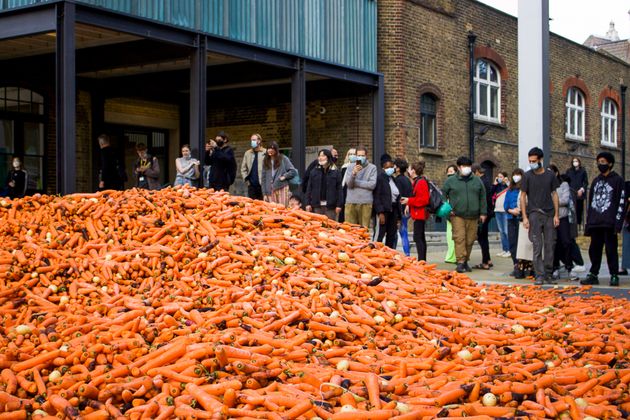 Some 29 tonnes of carrots have been dumped at the campus of a London art school as part of an exhibition highlighting the divide between town and country.

Mystery initially surrounded the orange produce that had been delivered to Goldsmiths in south London. A lorry was pictured offloading the vegetables on Wednesday.

Does anyone know why a significant volume of carrots has just been dumped on Goldsmiths university campus? pic.twitter.com/oYj51IxHfp

Corporate accounts were quick to engage in some banter.

Apparently quite a few students have been studying in dark rooms, so it’s to help with night vision

On Twitter, Goldsmiths explained the vegetable dump was all above board – and part of a masters of fine art (MFA) exhibition.

“It is an installation called ‘Grounding’ by the artist and MFA student Rafael Perez Evans,” they wrote.

“His work is part of Goldsmiths’ MFA degree show. Rafael has arranged for the carrots to be removed at the end of the exhibition and donated to farm animals.”

It is an installation called ‘Grounding’ by the artist and MFA student Rafael Perez Evans. His work is part of Goldsmiths’ MFA degree show. Rafael has arranged for the carrots to be removed at the end of the exhibition and donated to farm animals.https://t.co/EXzT9zZjws

On Perez Evans’ website, the project is explained as a “site-specific intervention exploring some of the tensions in visibility between the rural and the city”, and references infamous protests by farmers who feel neglected by urban elites.

“Bringing into contact two disparate forms: a large contemporary glass university building and fresh carrots, Perez Evans borrows the gesture of dumping from European farmers’ protests to transform it into a sculptural tool for grounding​. ​The therapeutic technique of grounding involves doing activities that ‘ground’ or electrically reconnect you to the earth.

“Dumping is a form of protest, regularly used by European farmers that react against a central government which devalues their labour, agency and produce to points of ridiculousness. This devaluation often produces an enforced invisibility, which is often reciprocated by farmers who create hyper-visible gestures by dumping their devalued produce. Vegetables such as carrots or potatoes become monumental barricades that can block governmental buildings or roads and with it interrupt the usual city flow.

“T​he city is a site that suffers from food, plant and soil blindness, a place hyper separated from its periphery, its food and its labourers. Dumping protests bring blinded city people into an alarming contact with their forgotten foods and its production.”

The website adds the carrots are “unwanted” by the food industry and will be collected after the exhibition and sent to feed animals. It comes amid uncertainty over the future of farming subsidies in the UK as a result of Brexit.

The exhibition opens from the October 2 and runs to October 6.