For months now, people have been toting around hand sanitiser and slathering it on anytime they touch a shared surface or object in public. We all know that hand sanitiser can help kill germs (including SARS-CoV-2, the coronavirus that causes Covid-19), but there may be some major errors we’re making when applying the product.

“There is no doubt that hand sanitisers are a convenient and handy resource to assist in mitigating the spread of infectious disease. However, it is not a ‘cure all,’” said KC Rondello, an epidemiologist and clinical associate professor at Adelphi University’s College of Nursing and Public Health. “There are many limitations to its use, so consumers must be aware of these caveats in order to utilise hand sanitisers in the most effective way.”

Here are a few hand sanitiser mistakes and tips on how to course-correct, according to experts:

Not all hand sanitisers are created equal. Rondello recommended using sanitisers that “contain at least 60% ethyl alcohol or 70% isopropyl alcohol” since those most effectively eliminate germs.

You should also read the label of the product to determine if its active ingredients kill bacteria, viruses, both or neither, he said.

“Using a product that is only bactericidal may give you a false sense of security, as it provides no protection from viral pathogens like SARS-CoV-2,” Rondello told HuffPost, adding that some products, such as baby wipes, may not even be antimicrobial at all. “They may have some use in deodorising and removing visible soil, but they will not have a meaningful effect on SARS-CoV-2.”

Avoid brands that contain methanol, which “can be toxic when absorbed through the skin or ingested,” said Makeda Robinson, a virologist who has studied the Zika virus, MERS and now SARS-CoV-2.

2. You’re not using your sanitiser for long enough

You know how you should be washing your hands for a full 20 seconds, enough for you to hum through the “Happy Birthday” song twice from start to finish? Well, you should also be doing this to some degree when you’re applying hand sanitiser as well, said Aaron E. Glatt, chair of the Department of Medicine and chief of infectious diseases at Mount Sinai South Nassau in Oceanside, New York.

You should rub sanitiser into your hands for 20 to 30 seconds and make sure to “rub it in until it’s all gone,” Glatt told HuffPost. 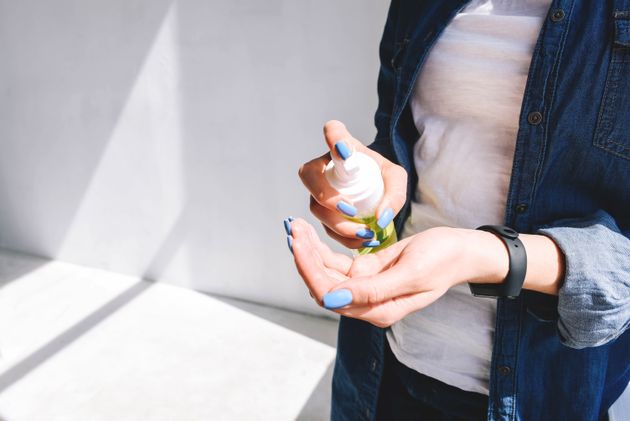 Not using enough hand sanitiser could mean that you are not successfully cleansing, Glatt said.

People often think that getting excess product off the spout or even just using a small droplet is fine. In reality, “you should push out roughly the size of a quarter or a nickel,” the epidemiologist said.

For those larger pump containers that are frequently found by the cash registers in stores, Glatt said a full push down on the pump should be sufficient.

4. You’re not getting every area of your hands

Any part of your hands that you leave unsanitised can carry particles of the virus. So even if you only touched something with one finger, you should always properly sanitise your whole hands — front to back — to be safe.

For example, say you pick up a pen between two fingers and sign a credit card receipt. Don’t just rub hand sanitiser around on those fingers. Cover your whole hands, including fingers and fingernails. In fact, you should “scratch your palms while still wet to get some product under the nails,” said Charles Bailey, the medical director for infection prevention at St. Joseph Hospital and Mission Hospital in Orange County, California.

5. You’re not storing it correctly

“You should follow the manufacturer’s instructions in terms of the temperature it’s supposed to be kept at,” Glatt said of hand sanitiser, noting that the wrong temperature can affect a product’s potency. “You don’t put it in the refrigerator, and you don’t put it out in the sun.”

Griffith Hsu, senior medical adviser for the medical supply company Medivico, added that products “must be stored below 105 degrees, as heat can destabilise the sanitiser and render them ineffective.”

6. You’re not sanitising before eating

You may clean your hands after picking up a carryout bag, but what about before you dig into the meal once you get home?

When it comes to hand sanitising, how often you do it is very important. Glatt’s rule of thumb is that if you’re going to put your hands near your mouth, be safe and sanitise again.

“I tell people, ‘Think about what you just touched. Would you be willing to put your hands in your mouth? Touch food? If not, then clean your hands again,’” he said.

7. You’re not being careful around candles or flames

“Consumers need to be aware that, as sanitisers are alcohol-based, they are flammable,” Hsu told HuffPost. “There have been reports of consumers suffering burns because of hand sanitiser use and open flame exposure, like cigarette lighters.”

After using a sanitiser, you should allow some time for the alcohol to evaporate, he added. And, as a general rule, avoid open flames for at least 30 minutes after application. 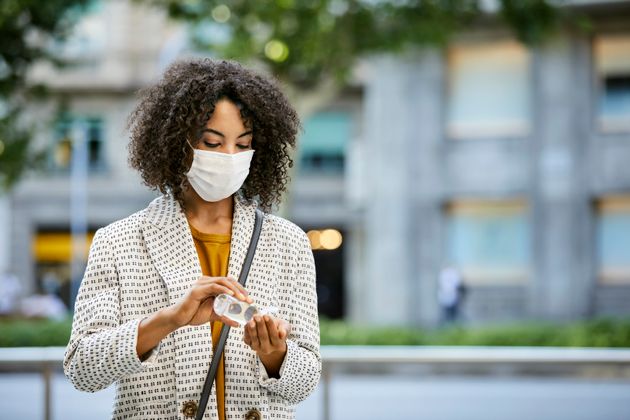 8. You’re sanitising when your hands are covered in dirt or grease

If your hands are dirty or greasy, the hand sanitiser may not have sufficient contact with the skin to do its job.

“This may lead you to feeling you’re protected when in fact you are not,” Rondello said.

If your hands are visibly dirty, you should always opt to wash them with soap and water first.

“Keep in mind that hand sanitiser is a good alternative when you are in a situation where you can’t wash your hands or your hands are not visibly dirty,” Robinson said. “However, it is not a blanket replacement for using soap and water, which is the best and most efficient way to clean dirty hands.”

If you are near a sink and also carrying hand sanitiser, using soap and water for 20 seconds should be the preferred method.

“The act of scrubbing with soap and water physically removes germs from the surface of the skin,” Rondello said. “Additionally, the friction created when drying your hands with a paper towel also helps by physically removing pathogens on the surface — an advantage lost when using hand sanitiser.”

9. You’re not allowing the product to dry

It’s important to not wipe your hands before the sanitiser dries.

“Attempting to accelerate the drying process with a towel is going to limit the sanitiser’s effectiveness since you are removing it before it has had a chance to do its job,” Rondello said.

He added that all sanitisers and disinfectants require a certain amount of contact time with a surface in order for them to kill the pathogens they are intended for.

“Removing them prematurely may dry your hands more quickly, but it may also render the sanitiser ineffective — giving you the impression that you’re protected when you’re not,” he said.

While this won’t necessarily harm the hand sanitiser’s effectiveness, it could leave you with chapped hands.

“Hand sanitisers kill not only bad bacteria but also good bacteria, which can irritate the skin,” said Nikhil Bhayani, an infectious disease specialist with Texas Health Resources in Arlington, Texas. “People should moisturise their hands immediately after use, preferably with a cream.”

“If skin irritation is developing, change products rather than decrease the amount of product used or the time spent applying or rubbing in,” Bailey added.

11. You’re making your own sanitiser

Panic purchases early in the pandemic led to a lot of people trying their hand at making their own sanitisers. Don’t rely on this method to keep you germ-free.

“Experts advise against it,” Bhayani said. “It’s easy to mistakenly create a mixture that’s not strong enough to kill germs.” 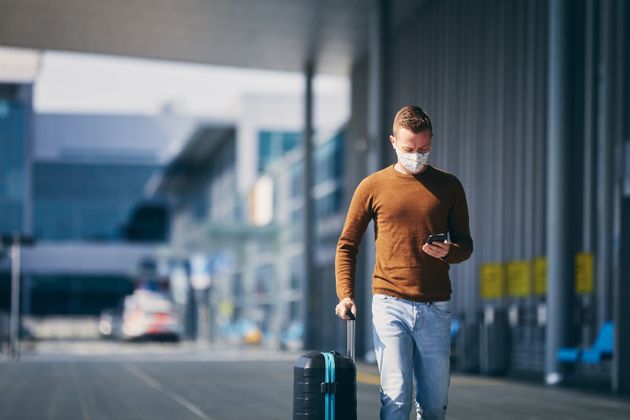 12. You’re not sanitising other items you are frequently touching

Sanitisng your hands but forgetting to sanitise your credit card, keys or phone could leave you open to infection, said Kristin Hughes, an emergency physician based in Chicago. This behavior could cause cross-contamination.

“I recommend putting the hand sanitiser on any high-touch items that you are carrying with you at the time of sanitising,” Hughes said.

13. You’re not checking the expiration date

It might seem simple, but checking the expiration date is important because the active ingredients in hand sanitiser will degrade over time, Rondello said.

“If you choose to use an expired product you have on hand because a newer one isn’t available at the time, know that it is likely not as effective as when it was manufactured ― so you are rolling the dice on whether you are protected or not,” Rondello said. “Bottom line: It’s better than nothing, but you want to replace it with fresh hand sanitiser as soon as you can.”

Essex Lockdown: Here’s Why The County Is Going Into Tier 2